Last year he brought us the Tusail, Dr Bill’s vision of an old-school Glenmorangie made with Maris Otter barley that rose to popularity in the brewing industry in late 60s/early 70s. Prior to that we’ve seen Glenmorangie made with lightly peated barley (Finealta), Glenmorangie matured in a host of different ex-wine casks (Artein, Companta) and even a 19 year old expression (Ealanta). And in terms of coming up with yet another crazy concoction, this year’s release is no different!

The Milsean (‘meel-shawn’ – Gaelic for ‘sweet things’) starts life as regular Glenmorangie spirit matured in ex-bourbon casks for 10 years, before being further matured in ex-wine casks for an extra two and a half years. So whilst it doesn’t carry an age statement on the label, you can do the math on this one! 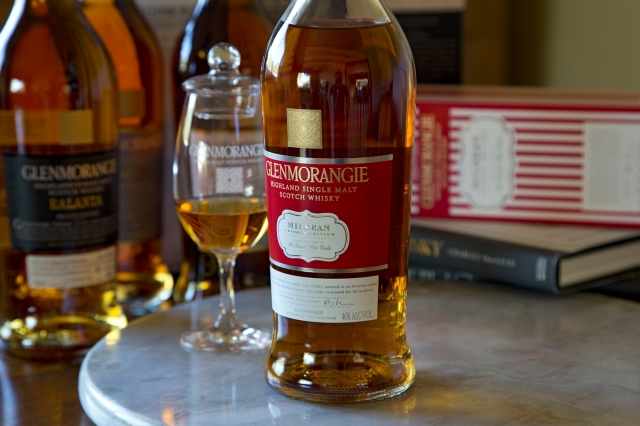 The ex-wine casks in question are former red wine casks from Portugal that have been re-toasted specifically for this whisky. If you’re not familiar with the process of toasting, it involves heating the wood (in this case, with a direct flame) to scorch or lightly char the inside of the barrel. This process re-invigorates the cask and caramelizes both the natural sugars in the wood and those in the wine residue left behind. The result? Some super sweet toasty goodness, ready to impart bucket-loads of flavor into the Glenmorangie stored within.

The name Milsean translates to ‘sweet-things’ and the candy-striped packaging conjures up images of an old-school sweets shop, so I’m expecting this to be, well, pretty darn sweet. So is it? 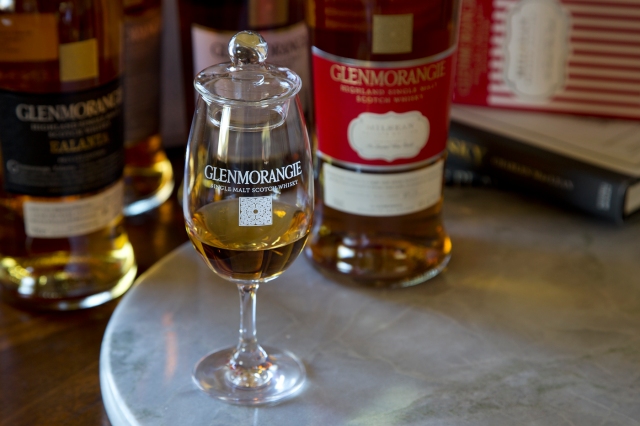 Very first impression on the nose? This thing is sweet. Confectionary sweet. Dig a little deeper though and its oh so rewarding. It instantly reminded me of a freshly opened bag of marshmallows, toffee nut brittle, gummy bears, sweet macerated berries and a hint of hot chocolate powder. There’s loads of creamy vanilla that reminds me of custard powder – the kind mum used to use when we were kids.

On the palate it’s got that classic Glenmorangie backbone you find in the ten year old, but it’s layered with an oily sweetness you definitely do not find in the ten year old. Oily chewy wine gum notes, honey, candied orange peel (including that bitter pith) and super ripe sugary plums. It’s followed by a fair whack of drying spicy oak on the finish, but I feel as though it’s accentuated by the preceding sweetness, which seems to linger into the finish as well.

Australia has received an allocation of 200 cases of Glenmorangie Milsean and it’s available right now in both specialty retailers and through Moet-Hennesy Collection at a retail price of $150. If you – like I – have a bit of a sweet-tooth when it comes to whisky, I have a feeling this will be right up your alley.

Thanks goes to both Moet-Hennessy Australia and the great people at EVH PR for providing the bottle reviewed here.

One thought on “Glenmorangie Milsean”