If I go and pick up any whisky bottle on my shelf, more often than not there’ll be some story behind the name on the bottle. It might be named after a valley, a region, a water source or some other aspect related to the liquid inside. Less often though do I pick up a bottle that bares someone’s  full name and even less often than that have I had the chance to actually meet said person. But thanks to a very special invite from Dramnation I can now tick that one off the list after having met Mr Paul John, the man – and the namesake – behind Paul John Indian Single Malt Whisky.

He was in town recently to meet some of Sydney’s biggest whisky fans and to also give us a sneak peak at a rather special new release, but more on that shortly. During his fleeting visit I had the chance to sit down with a couple of other whisky regulars and have a casual chat with Paul John, picking up some fantastic insight into the man and the Paul John single malt brand.

To better understand Paul John Indian Single Malt, it’s worth noting that it’s just one of a number of brands in the John Distilleries Pvt Ltd (JDL) portfolio. A portfolio of brandy, wine and whisky that caters heavily to the local Indian market and includes ‘Original Choice’ whisky, which sells over 10 million cases per year in India alone.

Despite JDL’s huge success in their local market with their other brands, Mr John tells us that Paul John Indian Single Malt only launched in India around a year ago. “I’m rather surprised in the response we’ve got so far and how many people are interested in single malt. Especially because of the way they generally drink whisky, which is completely different to the way you’d appreciate a single malt”. When asked about the size of the local market for their single malt, Mr John tells us that in the first year along, around 30-35% of their total output was sold in India and that going forward he sees it as being their largest market. To keep up with future forecasted demand they’ve recently doubled the size of their distillery with the addition of new fermenters and stills, allowing them to now produce 6,000 litres per day.

So given that the Indian whisky-drinking culture hasn’t really been focussed on the appreciation of single malts, I asked Paul John what actually led him to setting up a single malt distillery there?

“My father was in the alcohol distribution business and when I got out of college, I worked there”. This led to an alcohol manufacturing licence, which in turn led to the creation of Original Choice which would go on to become one of the largest selling brands in the world.

His work took him to the US for eight years and it was there where he was introduced to single malt whisky. “I had the volume of business coming in (from Original Choice) but from a production point of view it wasn’t really giving me the satisfaction, so I started thinking, I could make a world class single malt. Not for the money, but for the passion of being able to make one”.

Mr John started out by doing his homework, firstly to see whether there was any reason why a ‘world class’ single malt couldn’t be made in India. There were numerous trips to distilleries, he tasted their water sources and even carried some back to India to be lab-tested to see whether there was a marked difference between what other distilleries had and what was available to him at home. “If you look back at our history when we were ruled by the British, even the Maharajahs would carry water from India in big steel pots when they visited the UK. India does actually have excellent water”.

When he set out in 2004 to create the single malt that bears his name, the idea of it being of ‘world class’ quality was always at the fore. Mr John told us that although India doesn’t have any regulations on how whisky should be made, he took it upon himself to make sure that he followed all of the regs set out by the Scotch Whisky Association.

We further spoke of cask selection and India’s complex tax regime before we arrived at this, their latest release, the Paul John Oloroso Single Cask. 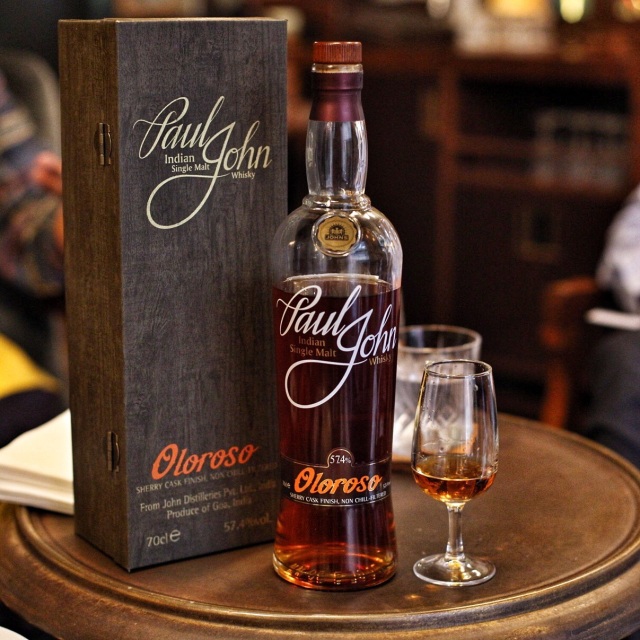 I’m no stranger to Paul John Whisky having tasted, and thoroughly enjoyed, their whole core range here. Beyond that, I’ve also had the pleasure of tasting a special single cask release that was bottled exclusively for the Oak Barrel in Sydney (still available to purchase here). But I’ve never tasted a sherry matured Paul John before, with good reason. This is the very first one they’ve ever done. And by very first, I mean ‘very first’. This is the first ex-sherry cask that’s ever been filled at Paul John, a trial they were doing at the time when they weren’t really sure how it would pan out. 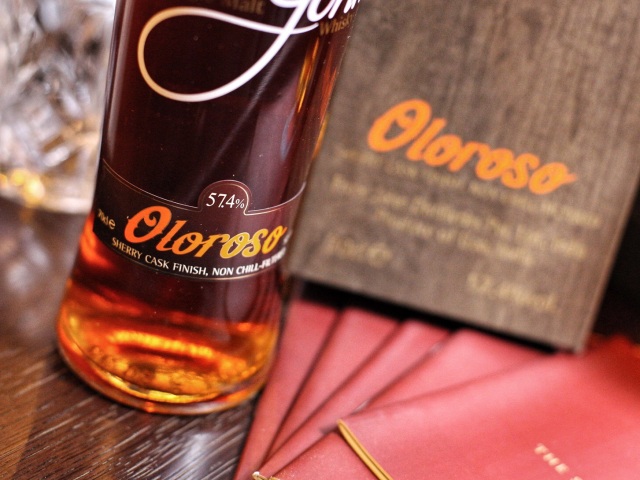 After spending three years maturing in an American Oak ex-bourbon bask, the spirit was transferred to a 55 year old ex-sherry butt for a further four years of maturation where it eventually yielded just 252 bottles. Let’s pause and mull over those numbers for a brief moment. A 500-550 litre sherry butt, yielding just 252 700mL/ 750 mL bottles in total after four years (around 175-190 litres of matured whisky). That’s some immense angel’s share!

Nose
On the nose there’s a huge bourbon character and I’m not referring to bourbon cask matured whisky. I mean notes you’d normally find in bourbon whiskey – leather, vanilla, maple syrup and liqueur cherries. But given time the Oloroso cask joins the party with a dry nuttiness, dried fruit and some spice.

Palate
The palate is full of those wonderful oily notes that are abundant across the whole Paul John range. It’s oily, creamy and rich, with spice and leather at the forefront followed by sweetness, dried fruits, wet brown sugar, cake batter and some tobacco notes. Despite the high ABV, it’s balanced and rich and is completely enjoyable. 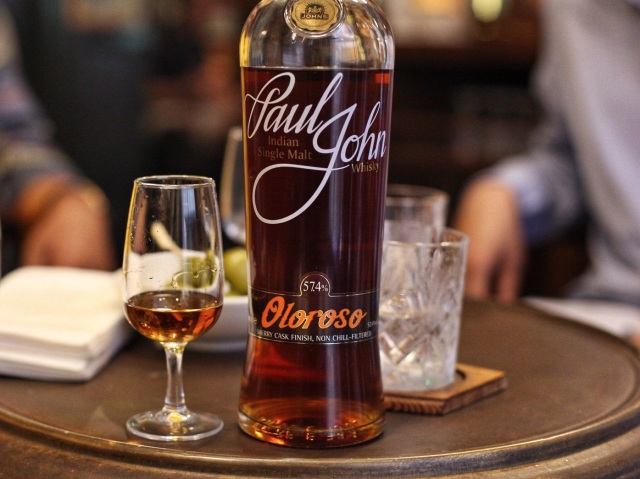 Of the 252 bottles in existence just 18 will make their way to Australia, so if you’d like to get your hands on one you better start doing some leg work now.

It was a truly insightful and rewarding experience to be able to meet and chat with Paul John, so a special thanks is in order to both Dramnation for organising the event and to Mr Paul John and his team for their generosity and time.