A number of distilleries come up with some pretty interesting releases for the travel retail/duty free market. Sometimes it’s just a bigger bottle, a higher ABV or non-chill filtering, but there’s also a healthy selection of travel retail exclusive expressions that you won’t find anywhere else.

So when a relative was going on a recent overseas trip, I asked them to pick me up a couple of travel-retail exclusives. Whiskies that I knew I wouldn’t be able to try elsewhere. At the top of that list was this one – the pedro ximenez finished Laphroaig PX Cask. 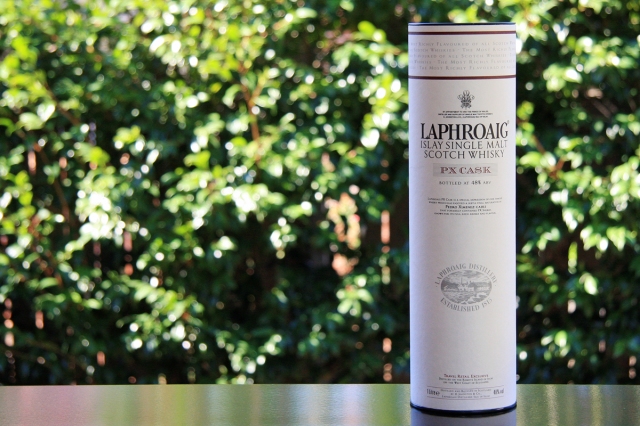 I’ve always enjoyed a good Laphroaig and was excited to see what kind of influence a pedro ximenez cask finish would have on their trademark medicinal peat notes. That excitement was somewhat short-lived though when I excitedly popped the top off the tube and had a peek inside… 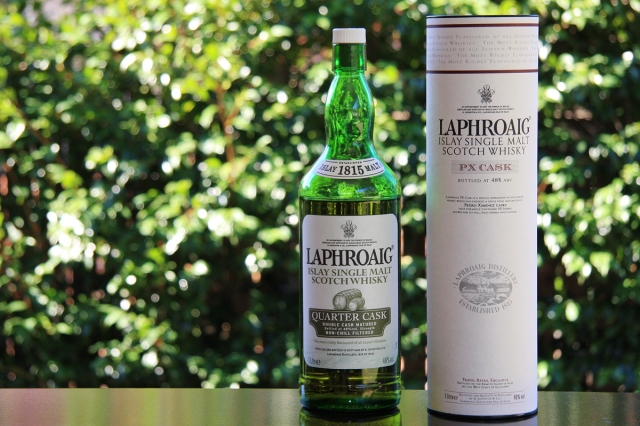 That’s right, at some point someone had swapped the bottle of Laphroaig PX for a bottle of Quarter Cask!

That’s kind of like unwrapping your Christmas present to find the box for a GI Joe action figure, complete with sub-machine gun and a big hunting knife, then opening the box to find a Ken doll with board-shorts and some sunglasses. Well, that’s probably a bit too harsh, but you get the idea – where’s my sherried Laphroaig!? Fiddlesticks!

It was by no means a total loss though, for I now had a whole litre of glorious Quarter Cask to work my way through. 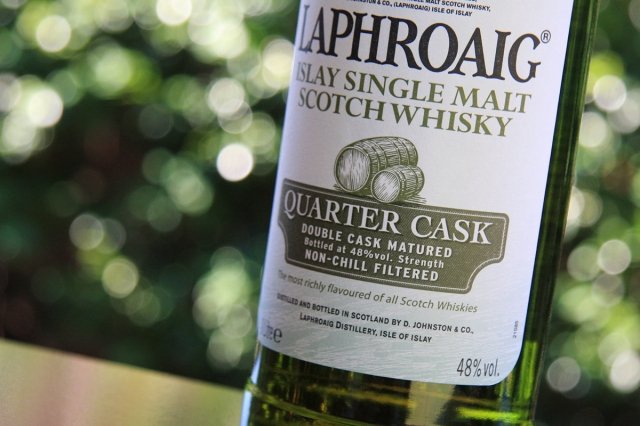 Laphroaig updated their packaging around May 2013, but this bottle is still in the older style, with a textured matte-paper label and the slightly older font.

Quarter cask is a No Age Statement (NAS) whisky (ie. there’s no age written on the label). But rumour has it that this expression spends the first five years of its life maturing in standard bourbon barrels before being moved into quarter casks for a period of around seven to eight months.

Thanks to this bottle, I’m now now a Friend of Laphroaig and also an international land owner, with my very own square foot of Islay! You just follow the instructions in this little booklet and Laphroaig send you your very own certificate of land ownership. Time to head over there and start excavating that square foot – Grand Designs style!

So what’s a quarter cask? The name’s fairly self explanatory I guess – it’s ‘a quarter of a cask’. But then I thought, hang on, what sized ‘cask’ are we actually talking about here? A standard sized bourbon barrel? A Hogshead? A butt?

I hit the interwebs in search of an answer and came across responses ranging from 40 through to 125 litres. I was still no closer to the truth, so I decided to get in touch with the folks at Laphroaig directly. I’ve since been reliably informed by a Brand Ambassador that the quarter casks they use are indeed 125 litres in size. They start life as a 42 stave once-used American Oak butt, before 15 staves are removed, reducing their overall size down to 125 litres.

Oily and coastal on the first pass. Brine, smoky seaweed, maybe some diesel and a vegetal cigar note. We’re well away from smoked meats, bonfires and BBQs with this Laphroaig – A real ‘dockside’ scent to this one in my opinion. Digging deeper I got some vanilla, some fresh zesty/tangy notes of lemon and something anise in character – black jelly beans or liquorice perhaps?

A medium oily mouth feel gives way to a decent burst of spice – baking spice and cigars. The anise note from the nose shows through slightly on the palate, along with a certain sweet ashy flavour and loads of peaty tang.

Smoke was apparent when the bottle was first opened, but months down the track it has dissipated significantly. The palate also seems to have gone from being fairly pointy and aggressive to a lot more rounded and slightly closed.

I thought this had a fairly good length to the finish and remained cheek-suckering for a few moments. I also got a certain drying vegetal tobacco spice right at the end, like the aftertaste of puffing a cigar.

I never did get to try the Laphroaig PX Cask..

..and just to rub a bit more salt into the wound, from what I’m seeing online it looks like everyone who’s tried it seems to rather enjoy it. It also looks like it’s slowly been removed from duty free stores around the world, so my chance may have come and gone.

All wasn’t lost though, as the Laphroaig Quarter Cask really is an enjoyable whisky. The fact it’s part of their core range and is bottled at 48% ABV non-chill filtered is a big plus in my books. If you’re already a fan of the classic 10 year old, this bigger winter warmer is definitely worth a try.

Late last year my father was given this handsomely presented Johnnie Walker for his birthday (along with two other JW’s – people, get a bit more creative with your whisky selections!) 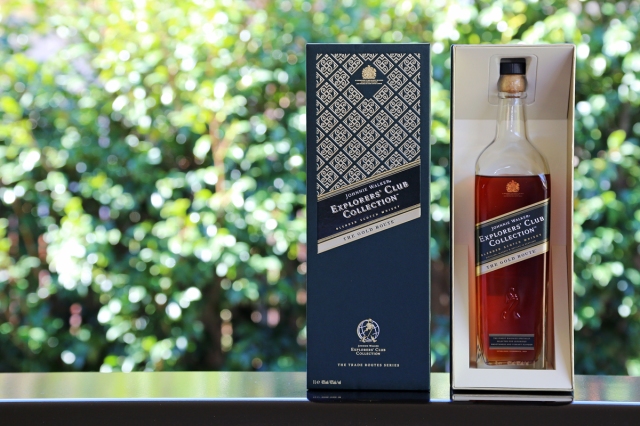 I didn’t know a single thing about it, so I hit the ole’ interwebz to do a bit of research and reading to get a better understanding of what I was about to taste.

Launched around March 2013, The Gold Route is the second release in the Johnnie Walker Explorers’ Club Collection – Trade Route Series (what a mouthful). It followed on from 2012’s The Spice Road and preceded the final release in the series, The Royal Silk Route which came out in October last year. 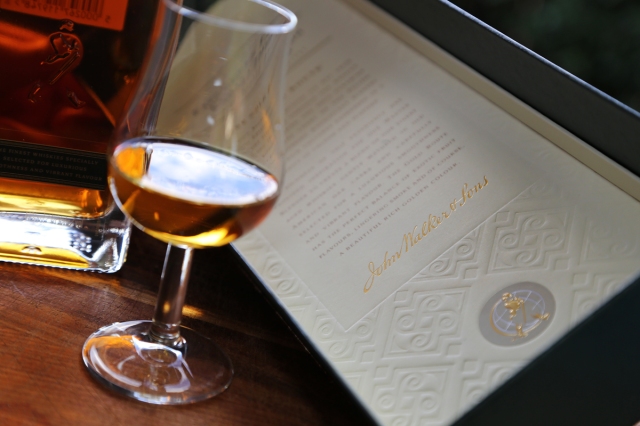 A series of three duty free/travel retail exclusives, the Trade Route Series pays homage to the travelling heritage of the John Walker & Sons agents who journeyed the world, bringing the Johnnie Walker brand to over 120 countries by the 1920s.

It’s a well-presented whisky, that’s for sure, and it’s not hard to see why someone travelling through an airport would be attracted to it.

This particular expression pays tribute to The Gold Route (or The Route of Gold), which runs through Central America, the Andean mountains and along the coast of the Pacific Ocean. The gold to come out of this region was used in some of Europe’s most well known churches and palaces and also provided some of the wealth on which cities like Rio and Lisbon were built.

Not surprisingly, Johnnie Walker’s owners, Diageo, were able to put together a pretty impressive marketing campaign for this release (and indeed the whole Explorers’ Club Collection).

There was a full photographic series featuring evocative images (such as the one above), elaborate store displays in airports around the world and a youtube video for each expression in the series

Although it was likely dreamt up by a clever marketing department, the whole celebration of travel and trade theme ties in rather nicely with the fact that it was only available in travel retail. I sometimes wonder how many purchasers would actually make that connection for themselves, but in any case, I noticed it and thought it was a nice touch.

“On the nose, there is an immediate wave of an exotic mix of bananas, mango and pitaya, complemented by a hint of vanilla sweetness. On first sip, the palate embarks on a journey that is as distinct and magnificent as the vistas of Latin America: tantalising flavours, a perfect blend of fruitiness with hints of pineapples, guava, passion fruit and raisins, all balanced perfectly by deep charred peaty notes, in keeping with the signature bold and smoky JOHNNIE WALKER flavour”

Here’s what I think

Sweet peat, a few meaty sherry notes, quite sooty and malty with hints of vanilla and some light coastal notes in there. A few months later, much softer and sweeter, really faint underlying smoke (almost completely gone), more of a zesty lemon tang kind of note, a touch of honey and some papaya hidden in there somewhere.

Despite the comments above, I would still call this a light-weight nose. Not overly heavy or deep (if that makes any sense).

First impression is that it’s thin and has a really soft entry. A decent amount of medicinal peat, tart orange marmalade, very little heat and very little spice. A few months later, quite a bit sweeter than I remember, hints of raisin, very little-to-no peat on the palate and a bit grainy.

Initially it was much peatier and smokier than any JW expression I’ve tried before, but that seems to have faded dramatically.

Initially quite mild, with very mild mouth warmth and some residual peat. Little-to-no spice or oak. After a few months, still a very mild finish in terms of length and warmth, but much more drying spice and some earthy/woody notes. Pencil shavings? (no, I’ve never eaten pencil shavings, but I imagine this is what they’d taste like!)

I must admit, I was somewhat surprised with this release (in a pleasant kind of way). I’ve never been overly thrilled with the Johnnie Walker’s I’ve tried to date. Not because of the whole ‘blend stigma’, but because I’ve always just found them a bit flat for my liking and lacking in any kind of complexity.

This on the other hand does actually have some degree of complexity to it. It’s got a rather interesting nose and the palate leaves you curious as to its make-up.

Overall, it’s still too thin, young and grainy for my liking, but it’s a pretty solid offering. I know big one litre bottles are a travel retail thing, but for someone who enjoys their whisky neat, I would rather have seen this in a 700ml bottle, bottled at 43% ABV, instead of one litre at 40% ABV. I think that would have gone some way to helping the thin mouth-feel and short finish.

The Gold Route retails for around AU $90 in Sydney, which isn’t too bad and I’m sure it’ll sell quite well.