If you’re a Glenmorangie fan, there’s a good chance you’ve heard of their annual ‘Private Edition’ release. It all started with the highly-praised Sonnalta PX back in 2009, followed by Finealta and Artein. Then there was last year’s release, Ealanta, which was awarded whisky of the year by the author of the Whisky Bible, Jim Murray. The 2014 Private Edition release – Companta – has just gone on sale in both the UK and USA and is fast selling out by the looks of it.

From what I understand, approx. 60% of the whisky in Companta has been matured in ex-Grand Cru casks from Clos de Tart, with the remaining 40% coming from whisky that’s been matured in ex-Rasteau fortified wine casks from Cotes du Rhone.  These were then married together, producing the amazing crimson-amber hue seen in the photo below.

The Australian market missed out on the first few releases, but the folks at Moet-Hennessy (the Australian importers of Glenmorangie & Ardbeg) did bring Ealanta to our shores last year. Will we see Companta arrive this year?

No official confirmation from Moet-Hennessy at this stage, but I’ve heard from someone in the industry that Companta will be reaching our shores around April. Let’s hope they’re right, as I for one am really looking forward to trying it.

This next one hasn’t been officially announced just yet, but someone did a little digging around online and managed to find these very curious front and rear labels for the new Ardbeg Auriverdes. I have a feeling we’ll be hearing a lot more about this one in the coming months! 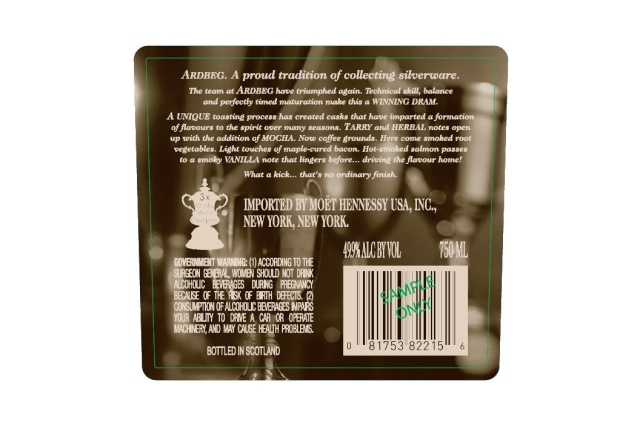 Along with the name (which I believe translates to ‘Gold and Green’), the wording and imagery on the label has lead many to speculate that Ardbeg’s latest has some association with the 2014 FIFA World Cup in Brazil.  Here in Australia, we’d like to think the green and gold reference has something to do with us – I somehow don’t think that’s the case though.

As with Companta, there’s no official confirmation from Moet-Hennessy just yet, but rumour has it we will see this expression in Australia around June. In time for Ardbeg Day 2014 perhaps? I guess we’ll just have to wait and see.

I don’t know about you, but I can’t wait to try both of these expressions!

ps. I always like to include my own photography in my posts, but until I’m able to get my hands on these gems, these stock images will just have to do! Isn’t Kevin Mackintosh’s photography magical!