Yes, it really does have Port Ellen in it.

The Johnnie Walker ‘Blue Label’ moniker is synonymous with luxury and rarity, so it’s fitting that when Diageo decided to blend together some of their rarest whisky stocks, they would release it as an extension of the Blue Label range. But that’s pretty much where the lineage to the ‘common’ Blue Label ends, as this new release from the striding man is almost in a league of its own. 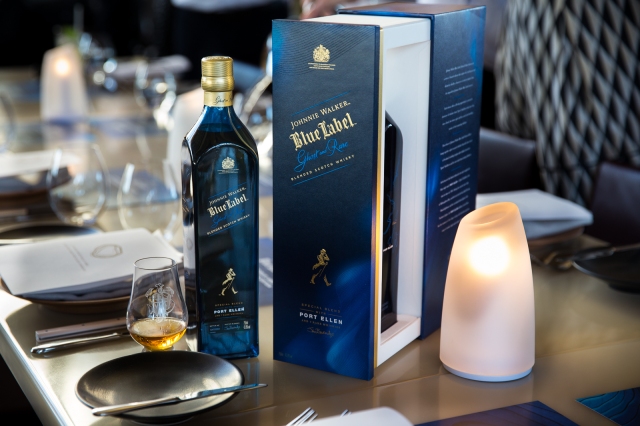 The new release I’m talking about is the Johnnie Walker Ghost and Rare Port Ellen and I was fortunate enough to attend a special preview tasting last week held at one of Sydney’s finest diners, Bennelong, at the Opera House.

The story of Ghost and Rare

The ‘Ghost and Rare’ element of the name comes from the malt and grain whiskies used in this blend, specifically those from the closed distilleries of Caresbridge and Calendonian (both grain distilleries), along with the fabled golden child of Islay, Port Ellen distillery.

Port Ellen’s history dates back nearly 200 years to the 1820s when it was founded on the south coast of Islay, the little island we now know as home to Scotland’s peated (or ‘smoky’) malt whiskies. It produced whisky for over 100 years before being sold to DCL, who we now know as Diageo, the parent company of the famous Johnnie Walker brand. After only a few years of ownership, Port Ellen was temporarily closed for some 37 years, before it was eventually brought back to life in 1967. The resurrection would be short-lived though, as the whisky glut of the 1980s hit hard. Diageo – owners of Port Ellen, Lagavulin and Caol Ila – had a tough decision to make, and in 1983 Port Ellen was closed for good. In the decades that have passed since, the ever ageing (and dwindling) stocks of this lost Islay distillery have become some of the most sought after single malts in the world. So when you see a Johnnie Walker release with the name ‘Port Ellen’ on the bottle, it’s the kind of thing that piques your interest.

The other thing to note is this; with Port Ellen and Caresbridge closing in 1983 and Caledonian closing in 1988, you have some seriously well-aged whisky in this blend. Aside from those three Ghost and Rare distilleries, malts from Mortlach Dailuaine, Cragganmore, Blair Athol and Oban also make an appearance, so this should be interesting.

On the nose I found it quite tropical, with some overripe, almost effervescent stone fruit. Behind that though were some interesting heaving notes; workshop grease, wet rocks and a salty maritime note.

The palate had a strong link to the nose with much of the above, along with a touch of citrus and a classy, tropical maritime peat note. 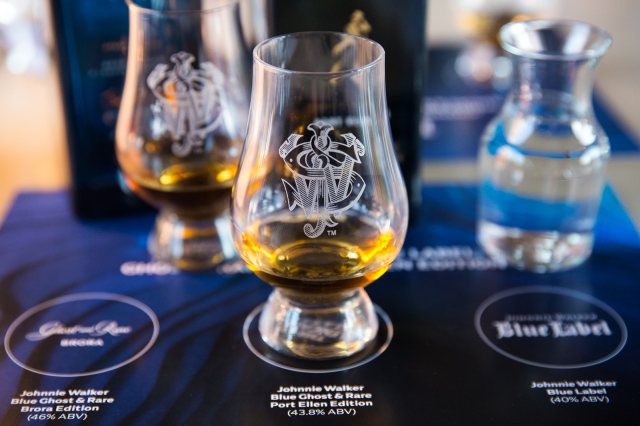 Is the Port Ellen really evident?

Normally I would be a bit skeptical and wonder whether my mind was playing tricks on me. I know it has Port Ellen in it. It even says so on the bottle. So am I just convincing myself I can taste the influence on that rare malt? That would certainly be plausible, but I don’t think that’s the case with this one.

Here’s an interesting thing about this release. The absence of a certain detail makes this just as interesting as the inclusion of detail (top marks to Diageo for telling us what’s in the bottle!). The peat influence in most Johnnie Walker expressions comes from a healthy dose of Caol Ila, but a quick glance at the bottle confirms that Caol Ila is indeed absent from this release. In actual fact, the only whisky in this bottle with any kind of discernible peat and maritime note is the Port Ellen. So while we don’t know exactly how much Port Ellen is in there, it’s enough to let you know it’s there! 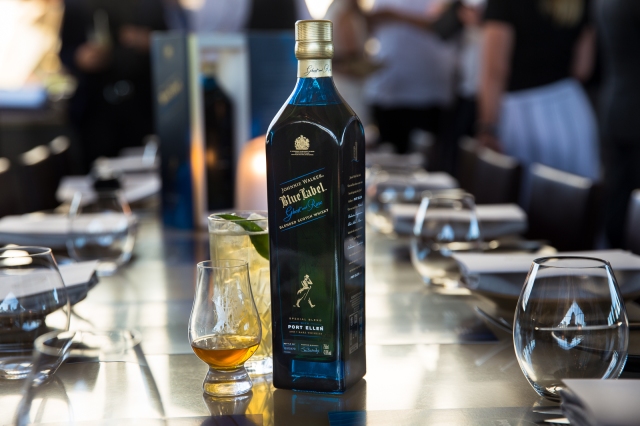 So as I asked last time – a clever marketing move? Of course it is! But it’s so much more than that. It’s genuinely tasty whisky, with some genuinely old and rare liquid in it and it’s been put together in a very clever way. To think of this as a standard bottle of Johnnie Walker Blue Label with a splash of Port Ellen is missing the point.

If you played a little word association game with the average person and asked ‘what’s the first country you think of when you hear the word whisky?, I’d say there’s a really good chance most people would say Scotland. Some might hit you with Ireland or the United States. Heck, Japan is probably high up on that list these days too! But I don’t think you’d get too many people saying ‘India’. 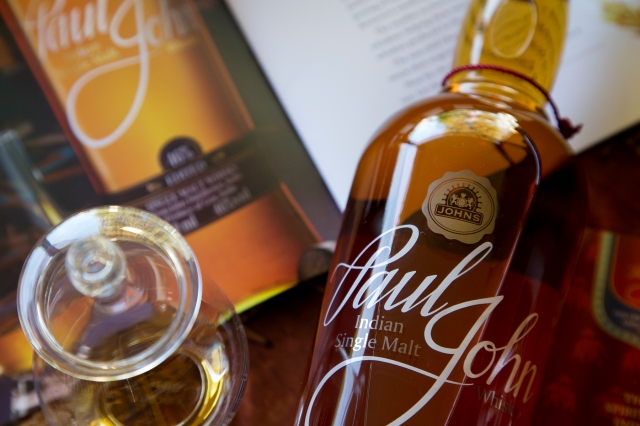 Don’t for one second think that’s because India isn’t a whisky-drinking nation though. It’s quite the opposite actually. According to these statistics, India is actually the biggest whisky-drinking nation on earth! To satisfy that demand they have over 40 whisky-producing distilleries around the country, but only two of those (as far as I’m aware) produce whisky specifically for the export market. The first, and perhaps the more well-known, is Amrut and the second – the feature of this post – is Paul John.

The brand Paul John comes out of John Distilleries’ single malt distillery located in Goa. The facility uses two Indian-made copper pot stills to produce in the region of 3,000 litres of spirit daily (1.1 million litres a year). This makes them similar in scale to a distillery like Ardbeg, who also have a single set of stills and a similar annual production capacity.

Not only does Paul John use Indian-made copper pot stills, but they also use a varietal of Himalayan 6-row Indian barely in the production of their spirit. This gives them a lower alcoholic yield, but Master distiller Michael John is of the belief that it helps give the whisky more characteristics of its country of origin. Casks are filled at 55% ABV (compared to standard Scottish filling of 63.5% ABV) before being matured in one of two warehouses. 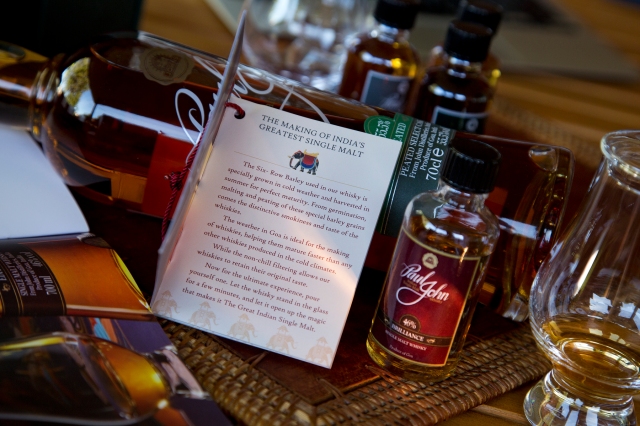 India’s hot and often humid climate makes whisky mature much faster than it would in Europe or the United States, with Paul John’s annual evaporation (‘The Angel’s Share’) being around 8% per year (compared to Scotland where it’s closer to 2%). As a result, their whiskies are often bottled anywhere between four and seven years of maturation. Paul John isn’t a brand you encounter too often here in Australia, so when they recently contacted me and offered a samples of their full core range I was more than eager to give it a try.

I’ll keep my notes brief, picking out some similarities and differences to try and form a better understanding of Paul John’s single malt profile and how the expressions compare against one another. One thing to note from the get-go is that all of their whisky is 100% natural colour and non-chill filtered.

The entry level expression in their range. Brilliance is made with un-peated spirit and is aged in ex-Bourbon American Oak casks for around 4 years.

Quite soft on the nose with some sweet vanilla and malty biscuit notes. There’s a hint of citrus, orange pith and oak. It’s chewy and oily on the palate and quite close to the nose – more citrus, zesty notes, spice and oak. It’s like a quality, soft Speyside whisky. 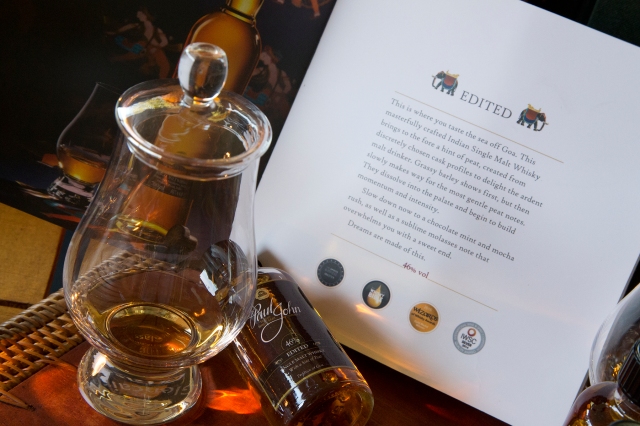 Edited is also matured in ex-Bourbon American Oak casks for around 4 years, however it contains around 15-20% of peated spirit in the vatting. To get peated spirit, Paul John import peat from Scotland and then peat their preferred 6-row Indian barley themselves.

Very soft again on the nose, almost muted in a way. There’s a definite hint of peat that presents itself in a salty, damp hay smoke kind of way. It’s there, but it’s also fairly subtle and integrated. I still get the same malty biscuit and citrus notes from the Brilliance as well.

On the palate the peat is quite pronounced upfront with a salty saline tang, that great chewy mouthfeel. There’s toffee, maybe even salted caramels and that bitter citrus pith note again.

A non-peated cask strength offering. A fuller, deeper and richer nose compared with the Brilliance, really showcasing the oily rich spirit profile. I got deep creamy vanilla, sweet malty cake notes and a hint of orange.

There’s a definitely lineage to the Brilliance in this one – with a similar general profile – but everything is cranked up to 11 and there seems to be more going on in the Classic Select Cask, probably due in part to the higher alcohol level. 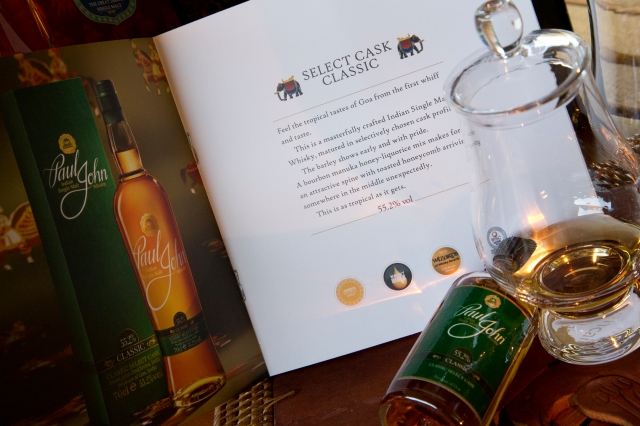 The ‘Bold’ expression takes us into full peated territory and a single small whiff confirms that. It’s quite deep and bold on the nose with sweet herbal peat notes. It’s quite vegetal though, like a highland peated whisky, with a salty saline tang.

It’s vegetal and peaty on the palate (though not smoky) with that saline tang from the nose, but it also manages to incorporate some sweet notes. It finishes with a big wave of lingering peat that dries out your tongue, leaving behind a slightly bitter oaky woodiness.

As the name suggests, this takes us into peated territory again, but this time at cask strength. It somehow seems more restrained on the nose, with a nice balance of peat, berry/sherry sweetness and that herbal salty peat note.

Loads of tangy, salty peat upfront on the palate, a hint of crisp drying smoke, vanilla, charred peaches and brown sugar sweetness. The higher ABV carries the peat notes through to a long satisfying finish. 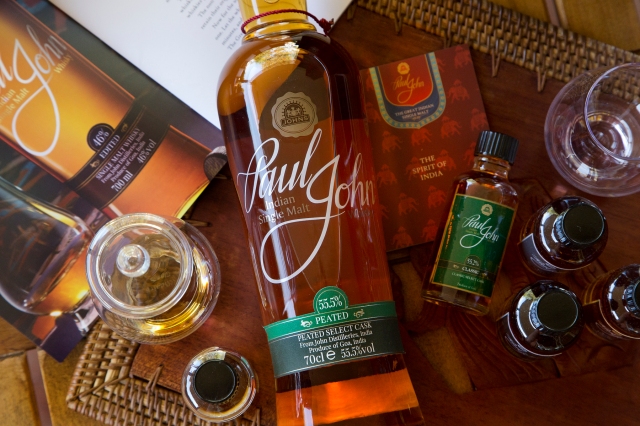 I was really impressed by the whole Paul John range. Not that I expected it to not be good, but I think in the back of my mind I didn’t expect it to taste anywhere near as mature and balanced as it does. None of these five expressions gave off any hint of their youth. The decision to bottle at 46% ABV and above with no chill filtering is a smart move in my opinion, with the full range having a fantastic oily, chewy mouthfeel that carries loads of flavour across the palate. Whilst some of the expressions are slightly restrained in their flavour profile, they were all nicely balanced and tasted like high quality, well-made whisky to me. If I had to pick a favourite out of the five, I think I’d go for the ‘Peated’ expression at cask strength. It had a lot going on in every sip and is genuinely great whisky. 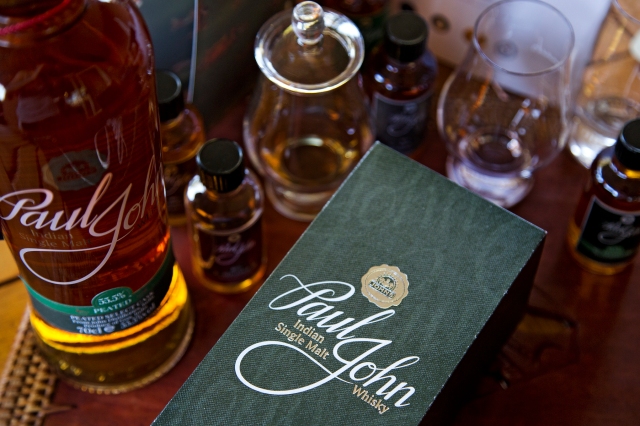 Paul John also kindly included a full-size bottle for me to photograph (pictured throughout this post). I’m a sucker for packaging and presentation and I have to say, the presentation is rather smart! An embossed card box with a magnetic closure opens to reveal a nice clean, modern bottle. The fonts/script used throughout are fresh and clean, the main branding is screen-printed and there’s a nice little swing tag including a booklet on all the basics you need to know about Paul John’s full range.

Mr Madhu Kanna, General Manager – Exports, from Paul John will be in Australia for the Whisky Live whisky show on 8th and 9th April 2016 so if you’ve got yourself a ticket, I encourage you to drop by their stand and try some Paul John whiskies for yourself!

Thanks goes to Paul John for the generous whisky samples. I’m looking forward to seeing your brand develop further and tasting whatever you bring out next!