The other week, the good folks at the Oak Barrel in Sydney  managed to secure Dr Whisky himself for a free tasting session of The Balvenie.

Who’s this Dr fellow? Sam Simmons (aka Dr. Whisky) is The Balvenie’s Global Brand Ambassador and just happened to be in Sydney for a whirlwind two-day tour that included no less than four events. Good thing he likes the stuff. 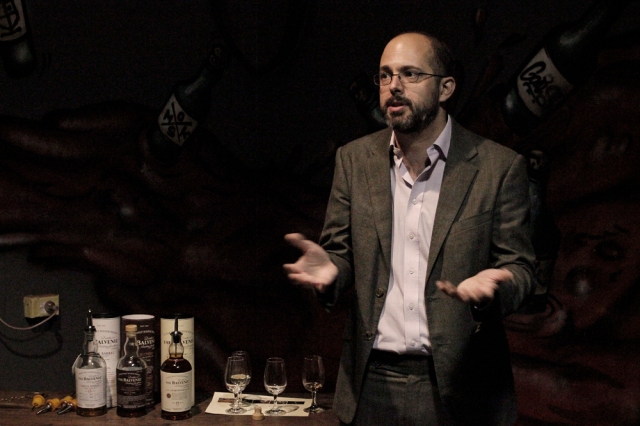 Walking in there, I think my brain naively told me ‘whisky ambassador? Must = Scotsman’, so I did a bit of a double-take when Sam spoke and I realized he’s actually a Canuk – and a genuinely funny and down-to-earth one at that!

The informal atmosphere of the Oak Barrel really lent itself to some great discussion and banter and both Sam and James (from William Grant & Sons) were genuinely knowledgeable, good sports. Bravo Balvenie, bravo!

What the Doctor prescribed

First up was The Balvenie 15 year old Single Barrel, (cask #10786 bottle #317 for the boffins out there) and as expected, it was on form. Big Balvenie honey and toasted vanilla notes with a hint of banana on the nose. Creamy on the palate with that wonderfully feisty, warming finish that comes with the higher ABV of 47.8%.

This was followed by the (new to Australia) 17 year old double-wood, which has spent 17 years in American Oak (aka ex-bourbon) barrels, followed by around nine months in European Oak ex-sherry casks. The 17 really comes across as a richer, more succinct version of the classic 12 year old double-wood and the extra 3% ABV (it’s bottled at 43%) is a lovely touch.

Rounding out the trio was the decadent 21 year old Port Wood. This expression starts life in American Oak, before being transferred to ex-port pipes for around four months. In the scheme of 21 years, four months doesn’t sound like a long time, but we’re told that the pipes are saturated with a vatting of some of the finest vintage port out there (~30 year old port, I believe) The richness and depth is fantastic, especially for a 40% ABV bottling. You get the classic Balvenie honey and creaminess mixed with wonderful rich, red-fruit notes and some chewy oak.

Really hoping I get the chance to review each of these in a bit more detail at a later date.

That wasn’t all though

As if that wasn’t enough for a Friday arvo tasting, there was still one more surprise in store. Sam was kind enough to bring along a 40 year old cask strength Balvenie, hand-filled by The Balvenie’s master distiller himself, Mr David Stewart. This was a money-can’t-buy whisky, so it was pretty special indeed.

After four decades in European Oak casks, the ‘73 had taken on an amazing mahogany colour and had a rich, full nose to match. At a natural strength of 55.2%, it was a heavy hitter, but still perfectly drammable (is that even a word?) without the need for water. It was incredibly complex and not overly oaked, which was quite a surprise considering how long it had spent in a cask. A seriously stunning whisky.

What’s remarkable is that despite the four different finishes and four different ages, you could really tell that these were all Balvenie. That marvelous creamy honeyed character really carried through all four expressions in its own way.

No doubt Sam’s schedule would have been pretty exhausting, but he still made time for everyone and didn’t miss a beat. A big thank you is in order for Sam and William Grant & Sons for their time and to the Oak Barrel, for hosting a thoroughly enjoyable and accessible tasting.