When opening a recent delivery from the good people at Abbey Whisky I was super excited to see that a couple of wee samples had made their way into the parcel.

What are they exactly? Well, Abbey Whisky recently celebrated their tenth year in business and to celebrate they released a trio of very desirable whiskies. The first release – a 1993 GlenDronach single cask – sold out in a flash, but was promptly followed by two additional anniversary bottles, pictured here in sample form. 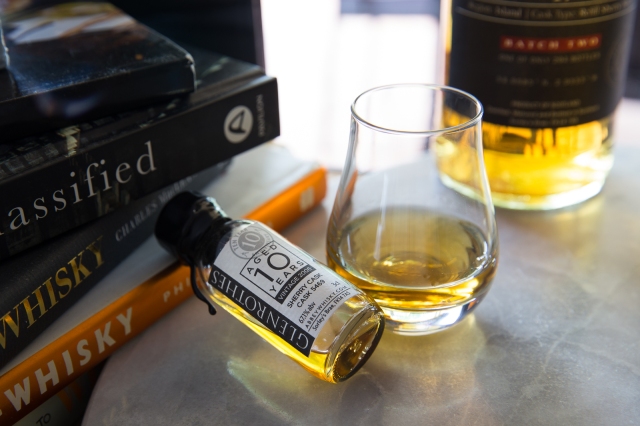 First up we have a 2006-vintage Glenrothes, from sherry cask 5469. It was bottled at ten years of age at a ball-busting 67.1% ABV. Glenrothes can be a little bit hit and miss for me, and I don’t really pay any attention to their official releases, so let’s see where this one sits.

Nose – Big vanilla and caramel. You know it’s high ABV, but I would never have guessed this high. Vanilla slice (the kind you get at a good bakery, with passion fruit icing on top), packet custard, gummy cola lollies and delicious bread and butter pudding. Plenty of complex sweetness in this nose, but give it some time in the glass and an interesting minerality emerges.

Palate – The alcohol is a tad more present here, but brings with it bucket-loads of sweet juiciness! No-where near as brutal as I was expecting. Creamy vanilla custard, with an almost buttery texture. Confectionery sweetness, jammy fruit and sponge cake, finishing with hints of dark chocolate, a slight fizz and some grassiness.

One for those with a sweet-tooth, but wow. What a killer little pocket-rocket. The most exciting Glenrothes I’ve tried to date.

Next we have Abbey Whisky’s third tenth-anniversary release, this 17-year-old mystery malt released under their ‘Anon’ range. In case you haven’t picked it up from the label, that string of numbers is actually a set of latitude and longitude coordinates. Punch them into google and hey presto, it looks like our anonymous malt is actually from Highland Park distillery. So, unofficially, what we have here is something pretty exciting – a 17-year-old Highland Park, matured in a refill sherry butt and bottled at 53.8% ABV.

Again, when it comes to official releases, Highland Park isn’t a distillery I really pay any attention to these days as they’ve well and truly lost me with their multitude of odd viking-inspired series. That said, I’m very excited to try this.

Palate – A lovely oily texture. Naturally sweet up front, with notes of bush-honey (it’s an Aussie thing), lavender and toffee. The peat is much more present here, delivering a smoky farm-yard – smouldering hay, floral tobacco and leather. It finishes with an earthy quality to it, some salted dark chocolate and a touch of sweet liquorice.

Complex and hugely rewarding. A really evocative dram that takes me right back to the far-north of Scotland. This is what Highland Park should be bottling themselves.

At the time of writing, both of these are still available at Abbey Whisky. I put my money where my mouth is and bought a bottle of the Highland Park the second it came out. After now tasting it, I’m very glad I did and am now thinking I might just pick-up another.. and a Glenrothes as well. Hmm…

Cheers for the samples Mike! Not that I doubted your taste in the slightest, but a couple of absolutely cracking selections here. Seriously.